This post is just another sort of status update.  This one I’m dedicating to talking about my host family.

I want to start off by saying that I understand waaaaaaay more now than I did at first.  Okaasan can be pretty difficult to understand sometimes, but that’s just because she uses a lot of dialectal words and speaks really fast…and uses lots of big words I don’t know…However, usually I end up understanding what she’s talking about based on context and stuff, so I understand about 60-70% of what she says.  Everyone else is way easier, so I understand about 80-90% usually.  (Outside the family…that’s a different story however…).  Anyway, we end up talking for hours almost every night and I have to say that as far as learning the language goes, nothing beats a host family.  Even when I’m tired and don’t feel like speaking Japanese, I have to;  if I don’t, I might as well not speak at all because they don’t understand English at all.

At first, I was like “Oh god, what…I…uh….words….and stuff.” (In Japanese of course, because I’m sophisticated and stuff…I can make a fool of myself in two languages now!  Aren’t you proud of me?)  But I kept talking anyway and now I can hold a relatively intelligent conversation.  I’m sure I still sound like I’m 5, but as long as we understand each other, I think it’s fine…  I actually take notes on the new words that I hear when we talk so I can look them up later (unless it’s a difficult word, then I ask them to explain it in simpler Japanese…which sounds counter-intuitive, but it makes sense, I promise; for example “bus station”[kind of hard word] becomes “the place where people get on and off the bus,” but if I don’t know the word for “place”…how are they going to explain that?).

Anyway, onto more detailed stuff about my family members!

The woman in this picture is Okaasan (and me, obviously).  I’ll explain the kimonos another time…  Okaasan is seriously like a second mom to me.  She looks serious in this picture, but she is always laughing and smiling; she has a great sense of humor and I always seem to be able to make her laugh.  One of our running jokes is that Okaasan is the “nicest person” because one night, Neesan did something mean and blamed it on Okaasan, but Okaasan overheard her and came back into the room, scoffing “Okaasan wa ichiban yasashii hito desu yo. Shiteiru yo ne” which means (essentially) “Everyone knows I’m THE nicest person.”  So now whenever she does something ‘mean’ like tickling me while I couldn’t see her (she did this recently and blamed it on Neesan, who was lying on top of me at the time), I say “Okaasan ga ichiban yasashii hito to omotta noni…” which means “Even though I thought Okaasan was THE nicest person (she would do something so mean).” xD  I love her to death and I don’t know what I’d do without her (and her AMAZING cooking). 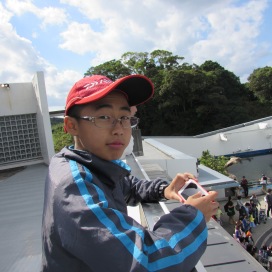 These next pictures are of Takumi-kun (I know he looks like he’s like 12, but he’s 18, I swear).  He is super sweet and we have fun with each other all the time.  Because he’s close to my age, I can be waaay more informal with him (and not feel bad about it).  For example, a few nights ago, we were playing a video game together and he was mocking me for getting a mediocre score (it was a rhythm game) after I said that I was good at games, so I had him try it and he repeatedly lost to his own high score, so I kept laughing at him.  At dinner, he suddenly said “poison!” in English while I was drinking and I was so surprised that I nearly spat out my tea.  He looked very pleased with himself, so when he was leaving that night, I said “Mata konaide ne” which means “Don’t come again,” but he said “Mata ashita kuru yo” which means “I’ll be here tomorrow” -.- Then he smirked and left.  Cheeky highschoolers these days. *shakes head*

You can’t really see her very well, but this is a picture of Neesan (holding Shi-chan).  I talk to her a lot, too.  Usually I tell her and Okaasan about my day everyday (it’s good speaking practice to use a variety of words) and then she and I have good conversations while I help her with the dishes.  She usually is pretty good at teaching me new words and stuff, too.  I also learned a funny thing from her; after work, she always puts “-sa” at the end of everything she says while she talks about her day.  I didn’t know why at first, but then I figured out that -sa is kind of equivalent to the English word “like.” (Ex. “So he was like ‘Are you working?’ and I was like ‘Harder than you!’ and like, I couldn’t believe that he wanted me to stay after work, too!) xp.

This is a closer picture of Shi-chan.  She is so precious and I love her, but despite being only a year and a half old, she talks CONSTANTLY.  Some of it is pretty cute though.  Whenever she sees me, she’ll say one of two things: “Nee-chan” or “Obentou.”  Nee-chan is  an affectionate term for an older sister figure, so it melts my heart whenever she says it and “Obentou”…what she means is “Obenkyou” which means “study” and she says this because while I’m at school Okaasan always tells her that I’m studying.  When I’m getting ready to leave for school, she sees me with my backpack and says “Shi-chan mo!” which means “Shi-chan, too!” so Okaasan has to carry her outside to say goodbye from the balcony until I walk out of sight.  While I’m gone, she’ll say “Nee-chan choudai” to Okaasan (which means “give me Nee-chan”) to which Okaasan will reply “Nee-chan morawanai yo!” (“you can’t have Nee-chan [she’s a person, not something you can ‘have’]”).  I’ve also been teaching her a couple of words in English, so she can say good morning and hello, but she tells me both regardless of what time of day it is, so I don’t think she actually knows what they mean. xp

I don’t have a good picture of Niisan, but as I’ve said before, he’s awesome.  He’s basically everything I would want in an older brother.  Kind, caring, patient, always concerned about me, funny…(I had to ask my family which numbers they liked and didn’t like for homework once [lucky and unlucky numbers was the theme] and he told me he didn’t like 13; I asked why and he said “Jason might come out!”xD).  He works himself too hard though since he’s got two jobs and lots of orders to fill from his shop for the holidays, so I’m always worried about him…

I don’t have a picture of Kaori-san either, but she has a fantastic sense of humor and I love talking to her.  She loves old American movies, just like me, so we kind of bonded over old Cary Grant and Audrey Hepburn movies xp.  She’s also really patient with me, but she talks kinda fast for me sometimes.  About a week ago, Okaasan came home with a bunch of gifts from an event she went to and I asked her if she was opening a shop as a joke, but Kaori-san took it a step farther and said “No, she’s going black market.”  xD  By the end of that conversation, we were laughing so hard we couldn’t breathe.  Takumi-kun said that we were dying. xD

Anyway, so that’s my family here.  They really are a second family to me and I love them so much.  If it wasn’t for them, I don’t think I’d be as happy here as I am now.  A lot of the dorm students seem kind of lonely a lot of the time…Niisan says that I should just find a family in every country so that wherever I go, I’ll always be home. ❤