Okaaaay, remember how I was going in order with all these posts?  Yeah, not doing that anymore.  I’ve given up on writing everything I’ve wanted to right up until now.  I’m just going to skip ahead to when I went to Yakushima (about two weeks ago) and go from there.  I’ll go back and write the stuff I did before that later, but I’m so far behind now that I feel like I’ll never catch up. xp

Anyway, so Yakushima (屋久島).  Yakushima is an island off the southern coast of Japan that is a world heritage site.  It has one of the most beautiful forests in the world and it was the inspiration for the setting of the Japanese animated film Princess Mononoke. I’d wanted to go there since I decided I was going to Japan, but I wasn’t sure when I’d get the chance to go, but then one of the girls in my program (Sarah) said she was going there in November, but she’s only in Japanese level 1, so booking tickets for things (the websites are entirely in Japanese) and actually getting there was going to be difficult seeing as she can barely speak any Japanese.  Therefore, Gen and I decided to go with her.  We planned everything ourselves, booked the bus tickets to Kagoshima (a city on the southern tip of Kyuushuu), booked the ferry tickets from Kagoshima to Yakushima, and booked hostel rooms.  We went from the 13th of November to the 15th. We left on Friday afternoon after classes, rode the bus for 5 hours to Kagoshima and crashed at our hostel there (I just want to point out though that our bus was like 20 minutes late, so we thought we’d missed it, but there were these two little old ladies at the stop who apparently sold tickets who told us which bus was ours and when it was coming.  Poor Sarah had no idea what they were talking about…) 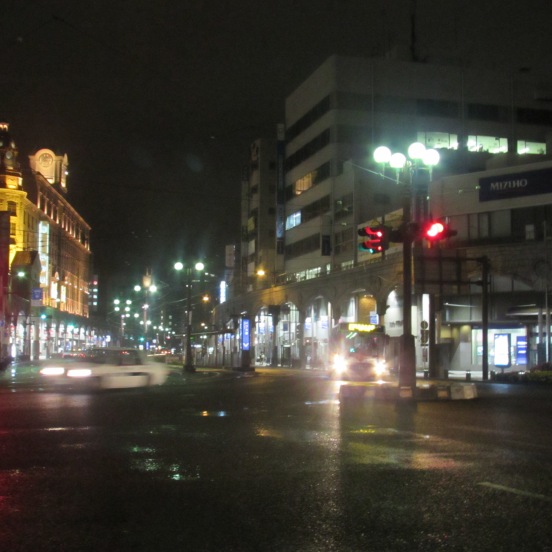 Once in Kagoshima, we explored around a bit to find some food and then went back to our hostel….much wetter than when we left. (Did I mention it was raining in Kagoshima?).

We stayed up late watching stupid comedy stand-up stuff on Gen’s tablet and then went to bed. Sarah and I were sleeping in a dorm with several other women (at least two of whom were from Spain.  I assumed as much since they were speaking Spanish, but I asked to be sure).  Everything was good…until about 6:50 am….when there was an earthquake.  I’ve never experienced an earthquake before.  I thought Sarah was shaking my bunk to wake me up.  Then everyone in the dorm started saying “Jishin? Jishin!” (Earthquake) and getting out of bed.  It wasn’t really that bad, but by that point Sarah and I were already up, so we headed downstairs to the common room to watch the news.  Gen and the rest of the boys in his dorm apparently just completely ignored the quake and rolled over to go back to sleep because he wandered down about an hour later.  We were watching the news and all they were talking about was the earthquake though….And all our friends from Nagasaki were bombarding us with messages on facebook asking if we were okay since we were near the epicenter. 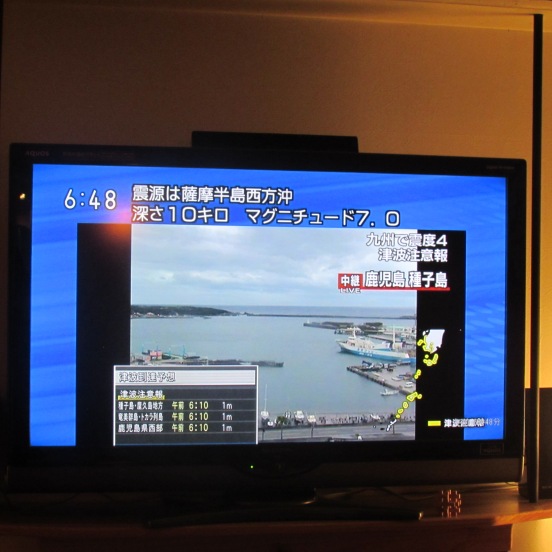 Needless to say, we were fine.

We headed out to catch our ferry at 7:45.  (I was particularly proud of myself for remembering how to say “Where does the ferry depart from?” in Japanese xp).  We got on the ferry and rode that for about 2 hours.  I think normally it might have made me sick, but it was a jetfoil, so it felt more like an airplane than a boat.

By the time we arrived in Yakushima, it was about 10:30, so we started trying to find a bus to take us to the trail head…but it had already left at 10:20.  (It was raining this whole time, so the three of us were already wearing our ponchos and other rain gear).  We went ahead and found the hostel we were staying at that night even though we couldn’t check in yet just so we’d know where it was, but I figured while we were there we might as well ask the staff if they knew if there was another bus or taxis or something.  So, we went in and I asked this nice old man at the entrance about the buses and showed him where we wanted to go on our map.  He said the next bus wasn’t until 1, so I asked about taxis and he asked if I wanted him to call one up for us.  After that, he asked where we were staying and we said “here,” which surprised him, but since we were staying there anyway he let us drop off our bigger bags and let Sarah borrow some rain pants and a waterproof coat.  (Seriously, I have never met such nice people as I have met in Japan) .

Speaking of which, when the taxi arrived, the driver (his name was Seiji Jingushi) helped us put our backpacks and wet ponchos in the trunk and then I got in the front with him while Sarah and Gen sat in the back.  About 5 minutes into the drive, the driver asked me if I spoke Japanese.  I explained that we were all exchange students so we could speak to an extent and so we proceeded to have a lovely conversation and he explained some interesting things about the island (he was from Yakushima originally and had lived there his whole life).  He even stopped to show us the wildlife a couple of times.  We saw these two monkeys on the side of the road, but as soon as we stopped to look at them they started getting busy….so the driver said “Ararararara!” and drove on (it was hilarious; I love how Japanese people do that xD).  Once we actually got to the “park” entrance, we paid the driver, but then he actually parked, got out of his car, and walked us over to the information booth, explaining how much everything was, where the bathrooms were, and which paths he recommended we go on (it was still pouring rain, so he pointed out which paths were probably closed due to flooding).  He seemed really worried about us since I could speak okay, but I couldn’t read a lot of the kanji on the signs (neither Gen nor Sarah had spoken at all…).  He also gave me the time for the last bus off the mountain (all the trails start waaaay up on one of the mountains on the island) and his phone number just in case we missed the last one and got stranded.  I was so touched he was so worried about us.

After that, he drove back down and we started up one of the trails (I didn’t put my poncho back on because it was pretty warm with all the exercise…I eventually took off my jacket, too, but the hat Kaori-neesan lent me for the trip was super nice for keeping the rain out of my eyes)….but about half an hour up that trail, we found that it was closed due to flooding (the driver had warned us that it might be, but we wanted to try anyway).  So we headed back down and started up a different one.  I can’t even properly describe how beautiful Yakushima is.  Even in the pouring rain, I was having a blast.  Gen looked like he wanted to die though.

After a while, the path we were going up looked more like a stream than a hiking trail.

We did get to see a lot of really cool trees and stuff though.  The whole place was beautiful even though it was raining and covered in fog. We ran into a bunch of Japanese tourists on the way up and down, too, so I got to speak a decent amount of Japanese as well.  I love surprising people with my Japanese.  Once I told anyone that I’m an exchange student, we launch into awesome conversations (“where in Japan are you staying?  How long are you staying?  How long have you been studying?  Why do you like Japan?  Your Japanese is so good.”  I’m pretty sure that last part is a lie though. xp  It’s just because I’m the first foreigner they’ve met who can say more than “Konnichiwa”) 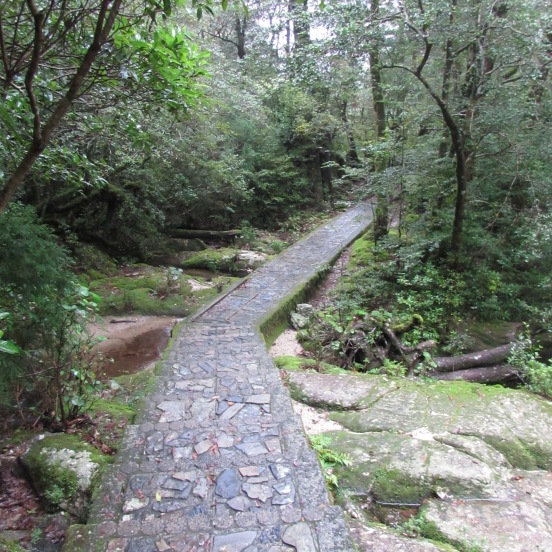 (I have a lot more pictures, but half of them are sideways and I don’t want to fix them right now, ugh…) 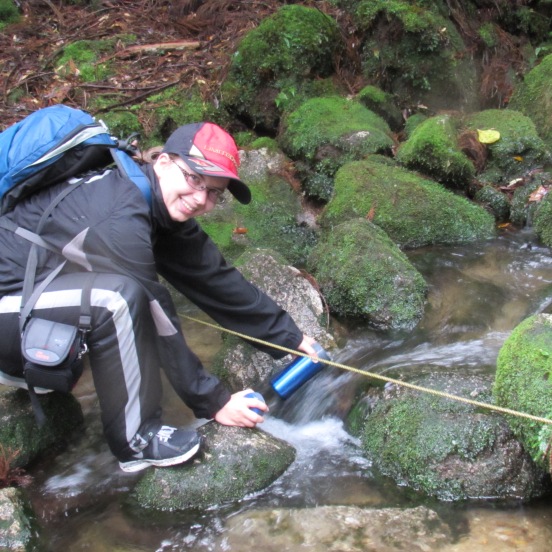 (Yes, that’s my thermos, and yes, I drank that.  I actually refilled it three times…What?  We were hot and dehydrated. Mom and Dad were kinda O.O though…xp)

We actually started hiking at about 11am and made it back in time to catch the last bus at 4:30, so I think we did pretty well.

This is us after the hike.  I asked one of the Japanese tourists who was also waiting for the bus to take our picture (I changed shirts…into one that was only damp, not soaking wet):

(It also turned out that split three ways, the taxi was cheaper than the bus.  How often can you say that?)

We got back to our hostel and crashed, hanging all our soaking wet stuff all over the room to dry and eating convenience store food in our room.  Gen taught Sarah and I how to play a Chinese card game (I don’t remember what it was called though…)

The next morning, we got back on the ferry (shown in the picture above) and headed back to Kagoshima, where we spent about 4 hours (and had some of the most amaaaazing ramen) until the bus for Nagasaki came.  While we were waiting for the bus, we saw a store with all the mascots of Kagoshima on the windows.  It was adorable:

They’re all pigs and they all represent different parts of Kagoshima’s culture (a famous university, famous hot springs, sake, fish, beaches, pottery, food, a space program [notice the pig riding a rocket], and bamboo).  If you spend any amount of time in Japan, you’ll see mascots EVERYWHERE.  There are mascots for schools, police stations, prefectures, cities, stores, construction companies, hospitals, etc.  I actually bought a little key chain of the food pig mascot for Kagoshima as a souvenir (this isn’t the key chain, obviously, but the key chain I have is of the pink pig in this picture): 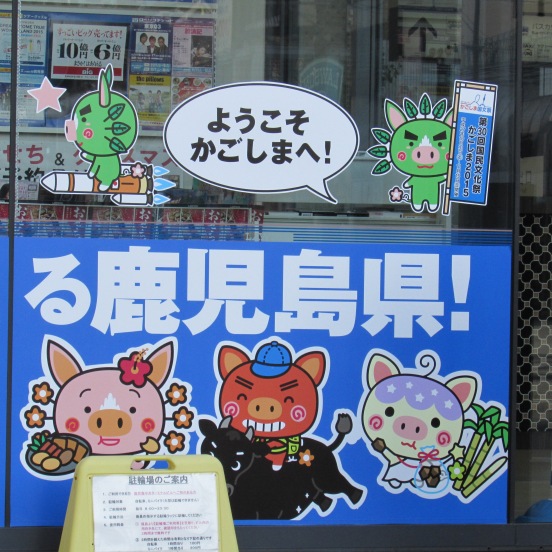 It was completely exhausting, but I had a blast.  Onward, TO ADVENTURE!