Alrighty, back on writing these things….as they get more and more vague because so much time has passed.  Oh well, here we go!

So, at the beginning of October (I know, I know…) there was a three-day festival called Okunchi on the 7th, 8th, and 9th (if you want to look it up, it would be “the Kunchi festival”).  It’s one of Nagasaki’s most famous festivals; it starts and ends at Suwa Shrine and it used to be a sort of harvest festival.  The first day of the festival, the god(s) cross over where the spirit world and the physical world are closest in Nagasaki (the shrine) and then he(she/it/they…look I don’t know, ‘kay?) is carried down to Dejima wharf. (So that day, a large procession of people carries a large float down to Dejima)  The second day, the god(s) is blessing the weather, crops, etc. and the third day they carry the god(s) back to the shrine to cross back over.  That’s the explanation I got anyway.  The reason it’s so vague is that there is no plurals or gender in Japanese….and my host mom gave me this explanation…and she speaks absolutely no English whatsoever.

So, most of Okunchi was during my school week, so I couldn’t go, but after school on Friday, I arranged to meet up with a bunch of people to go see the festival.  I was with the Chinese students I had met up with before as well as a couple of extra American students and a Korean student who is in my Japanese 4 class (his name is Hyok and he’s often my partner in class :)).  We met up with Niisan at the bus stop near my place and got on the streetcar together to go see the festival.  Honestly, I think most of the cool stuff was pretty much over by the time we went, but the fact that we all went together made it pretty fun.  We saw one performance and then wandered off to find street food…aaaaand subsequently lost half the group in the crowd.  Woops. 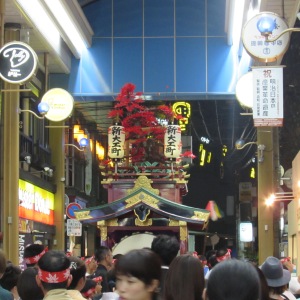 But at the stalls, each of the people in our remaining group bought something different and we all shared; it was delicious.  However (funny story time incoming…), when I was buying my food (I bought grilled squid) Gen was helping me decide what to get and the old lady at the stall looked at me expectantly and asked if my boyfriend (Gen) and I were going to eat what I was buying together.  (I just want to point out that this is the first Japanese person I’ve talked to who didn’t seem surprised that I understood her and responded in Japanese)  I tried to explain that Gen and I were just friends…at which point she winked at him and said ｢でも、かれしになりたいやろう？｣ (Demo, kareshi ni naritai yarou?) which means: “But, you want to be her boyfriend, right?”  *sigh*  And he of course said no, but the old lady thought she had us all figured out and kept giving me this knowing look.  As we were leaving, she said we should come back once we had started dating.  xD

(By the way, this seems to be a common thing that happens to us a lot.  Since Gen is Asian, when people see us together, they assume I’m either his foreign girlfriend or wife.  Sooo…it’s hilarious to see the looks on people’s faces when I speak Japanese instead of him.  My Japanese is significantly better, so I usually do the talking xp)

One thought on “And They Never Listen to Us…”