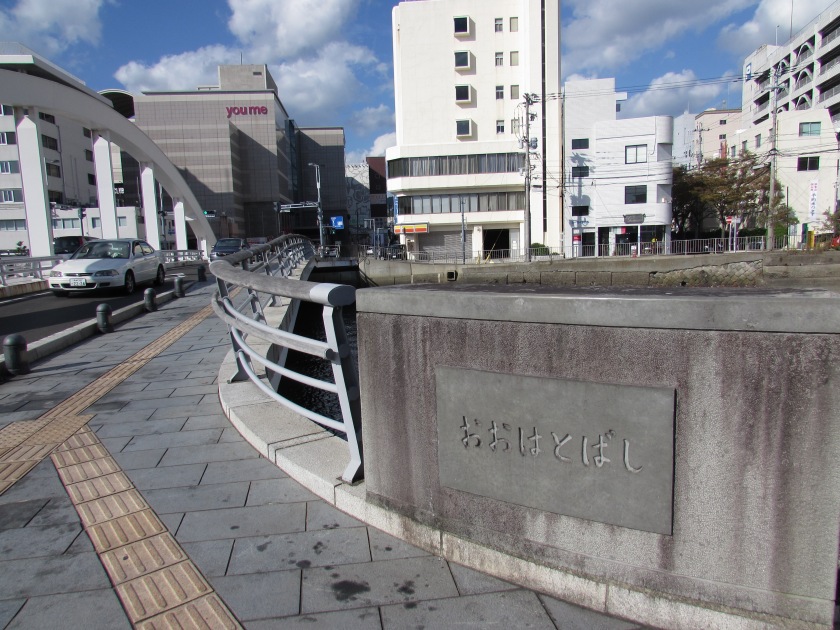 I know what you’re all thinking, and YES, I am perfectly capable of making jokes about my own lack of intelligence from time to time without outside help (I’m looking at you, Rachel -.-)

So, no pictures for this post really (just a street/bridge…because reasons); this is just an update on my boring school and stuff. =p

I took a butt-ton (yes, that’s a real word…now…..don’t criticize me, I’m an English major, we make up real words all the time) of classes my first week because the way the class registering system works here, you just attend all the classes you might-maybe-sort of want to take and then you just start dropping classes from there.  Now I’m doing 16 credit-hours a week.

Originally, over half my classes were taught in Japanese, but in two of them, the teachers talked so fast, had such bad handwriting and such thick accents that I could barely understand a third of what they said, so I dropped them (those classes were “Japanese Literature” [日本文学] and “Nagasaki and the World” [長崎と世界]).  Now I’m taking Martial Arts, Japanese 4, Japanese Film, Kanji 3, Japanese Contemporary Literature, TEFL (Teaching English as a Foreign Language), Seminar in Japanese Studies, and “Japanese Culture” [日本文化].  Out of those…Martial Arts, Japanese 4, Kanji 3, and Japanese Culture are taught in Japanese, so I think it’s about half (feels like more though because I have Japanese 4, 4 days a week).

Thankfully, talking to my host family for hours and hours every night has improved my Japanese tremendously (especially listening), so classes taught in Japanese aren’t too hard.  The only one that’s kind of hard to understand is the “Japanese Culture” class because it’s a class for the NICS students; you know, the students who are like all in Japanese 6 and above.  I’m the only white person in that class, so I get singled out…a lot.  Gen is American, too, but since he isn’t white, he doesn’t stick out. I ratted him out to the teacher though xp.  The teacher was talking about the seasons and the beauty of the Sakura blossoms and stuff, so he asked me if I’d ever been to New York.  I said I hadn’t, but then I pointed over at Gen and pointedly said, “SO, you’re from California, right?  Have YOU ever been to New York?”  He said “no” and gave me a glare that could have wilted freshly cut flowers. xD

So, yeah, class is class basically wherever you go.  I wake up, ride the bus to school and sit in classes for a few hours.  My college here is more like a high school than a college though.  There’s only one building (technically there are three, but one is a tiny building for clubs and one is the gym, so I’m not sure they really count) and a bell rings at the beginning and end of each period through the speakers.

The food in the cafeteria is actually pretty great, but I’m so stuffed from Okaasan’s breakfasts that I’m usually not hungry for lunch.  I just hang out in the cafeteria during my free periods since it’s practically deserted if it isn’t lunchtime.  Otherwise, I hang out at the big table in the lounge since that’s where all of us pasty white people (mostly) gather to freak out about the homework we didn’t do and/or watch youtube videos together (today was Dylan Moran comedy shows and Weird Al Yankovic music videos, but it varies xD).

There are four floors to my school (good thing I’m in shape from all of Nagasaki’s hills) and all of my classes are on the second or fourth floor (the third floor is just teacher’s offices).

But yeah, I go to class five days a week and have a decent amount of homework though nothing like the piles I got back home.  In the evenings, I chat with my host family and they all gather around to help me with my homework (apparently watching me suck at grammar is very entertaining; for example, one of the problems I was given said [in Japanese] “Judging by Mr. Yamada’s dirty clothes, he probably_____” and I said “he probably didn’t go home” which made everyone dissolve into laughter for a good five minutes; when they could finally talk again, they said “maybe, but it’s really rude to say something like that!”  oops xD)

On weekends I tag along with my host family on trips or plan hiking trips and stuff like that with Gen or some of the other exchange students.  Oooor I grab my laptop and go sit in the park to watch anime and stuff.

Aaaaaaaand that’s basically my life right now.  Not super exciting, but at least I feel at home here. =)

One thought on “You Have that Vacant Look in Your Eyes that Says, “Hold my Head to Your Ear; You will Hear the Sea””