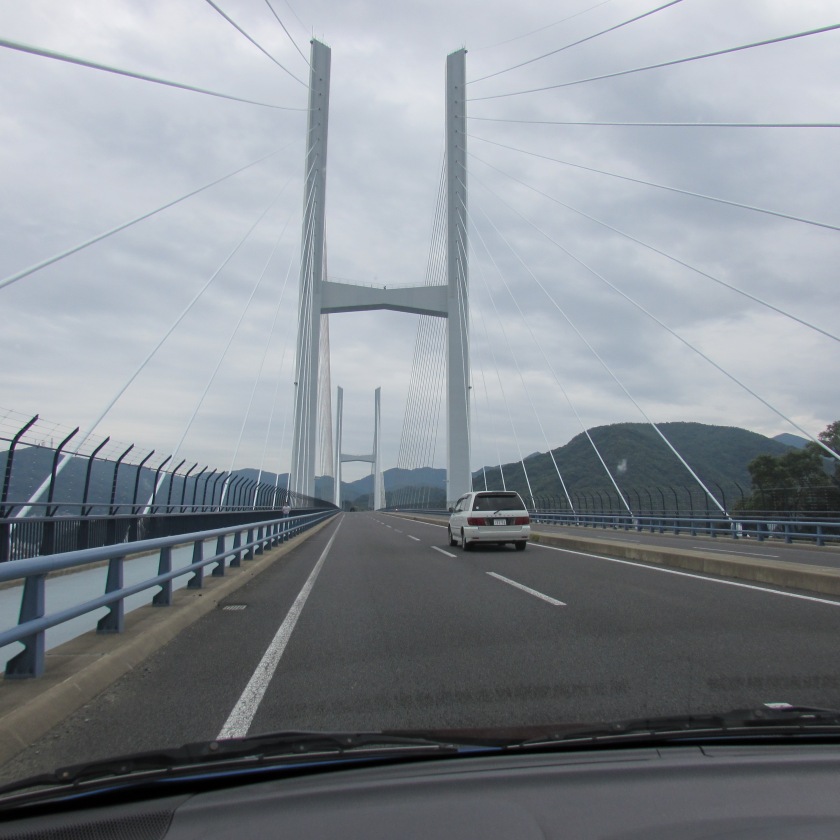 The Thursday after I got home from Unzen, Niisan had his first day off since I had arrived.  Usually he has two jobs: he works in a bakery from 4-9am 5 days a week and from 11-8 at his cafe 5 days a week.  Therefore, because of overlap, he only has Thursdays entirely free.  Anyway, he decided that he wanted to spend the day showing me around Nagasaki.  I had mentioned that I loved the ocean, so after breakfast, we set out to go to the beach.  It was a pretty rocky beach and the sky was overcast, but it was still a ton of fun. 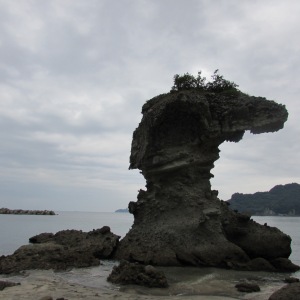 Niisan pulled a pair of crocks out of his bag so that I could go in the water without hurting my feet and then we climbed some of the sharp rocks together.  You see that tall rock in the photo?  We climbed one that was a little higher further back on the beach to get a good view of the ocean. 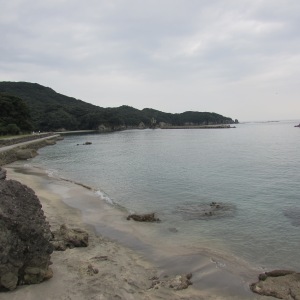 Usually, speaking Japanese is fairly intimidating for me when I’m talking to a group, but since it was just Niisan with me that day, I had no fear of making mistakes and we sat on that rock talking for a long time.  That was the first time I felt like maybe I could actually do this.  Since arriving in Japan, I had barely understood any of what Okaasan (my host mom) said and I always felt like a child because everyone had to dumb things down for me (even now, I still feel a little that way sometimes, but now I understand about 70% of what Okaasan says, so it’s less frequent).

Suddenly, it began to rain, so we ran barefoot back to the car, but our feet were covered in sand.  I took a water bottle that Niisan had given me to try and wash the sand off my feet, but when I started doing that, Niisan had a look on his face like “Oh….no….”  and he ran off.  I didn’t really understand why…until he came running back with a bag (yes, a bag….and a leaking bag at that) of water that he had filled in a nearby bathroom; apparently the liquid in the bottle he gave me was not water…oops.

So, we used the bag of water to rinse off our feet and got back in the car to go tour Nagasaki.  Nagasaki is essentially a huge bowl surrounded my mountains and filled with hills, so Niisan drove up and down and all over town to try to find a good place to see the city from. 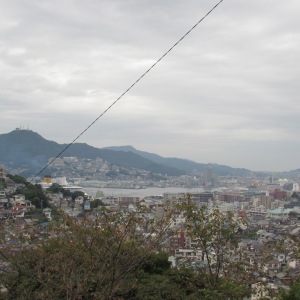 After that, we set out to find a place for lunch and ended up at a ramen place (but I only ordered gyouza ^.^) after Niisan had asked about 8 of his friends if their shops were open so we could go there.  It was a holiday, so none of them were at their shops though.  This was also the first time that I really noticed the Nagasaki dialect in Niisan’s Japanese (he told me that his accent only comes out around friends or if he gets too excited or angry).

That night, Niisan actually explained the Nagasaki dialect to me (in Japanese, it’s called Nagasaki-ben).  This likely won’t mean much to most of you, but here is a brief Japanese lesson:

In Japanese, the word kara is added to the end of a phrase or sentence if you want that phrase or sentence to express a reason.  It’s used similarly to the word “because,” but it’s placed at the end of a phrase rather than the beginning.  However, with Nagasaki-ben, they replace the word kara with the word ken.  So, the phrase Gakkou ni itta kara (Because I went to school…) becomes Gakkou ni itta ken.

Similarly, the word they use for “right” as in “It’s on Monday, right?” is deshou, but in Nagasaki-ben, they replace deshou with tai.  There are more examples and an accent as well, but those are the most prominent ones.  I’ve been practicing using it, too, but I’ve been told not to use that in polite company because it makes me sound like a hick.  xD  Niisan told me (in Japanese of course) “Make sure you learn pretty Japanese, too, because no one will understand you if you go to Tokyo and use Nagasaki-ben, and even if they understand, you’ll sound weird.  In Nagasaki though, you sound a little pretentious if you don’t use Nagasaki-ben with your friends.”  So….that’ll be fun to figure out.

2 thoughts on “I Don’t Sound Like I’m from Nagasaki?”